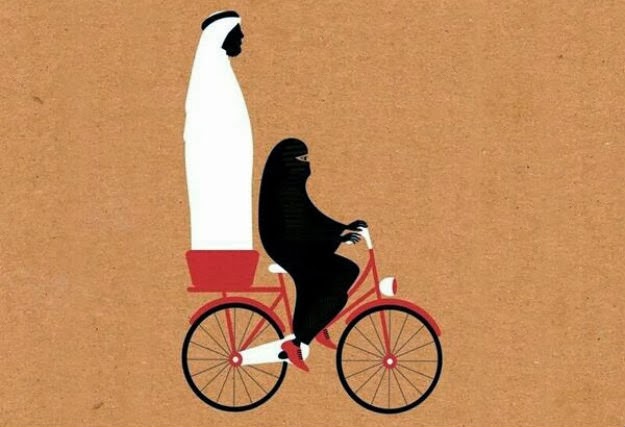 When I decided to write this article, I was thinking about all the struggles I had, being a Syrian “woman” who lived in Saudi Arabia.

It was nothing like any other experience in this world, but do I regret it? I certainly don’t and here’s my full Saudi story. I went there after getting married because of my husband’s job. He used to travel a lot, and I had to stay alone in the land of the sand.

It’s not legal for women to drive cars in Saudi Arabia so, at first, I had to find a good, trustworthy driver, and after a couple of months and many bad experiences, I got in touch with a good driver who then took me everywhere, at any time for the next six years.

Dress Code
It is not legal for women to go out in Saudi without being fully covered in a special long black dress called “Abaya”, and a hair cover. In some places, I had to cover my face, too. That wasn’t a problem; I got used to it so much that I often went out shopping or with friends wearing my sleeping pyjamas with the Abaya over it. Who cares?? Nobody is going to see what you are wearing anyway!

Because of the lack of activities and entertainment opportunities for women in Saudi, shopping is their first, and sometimes the only, hobby.

However, it’s not legal to have fitting rooms for women inside stores there, because women are supposed to be covered at all times when they are outside, and using fitting rooms in shops, where there are men, is not safe because someone could see parts of her body or fix a camera inside women’s fitting rooms. Therefore, there were some fitting rooms in the ladies’ rooms, but you still had to pay for the clothes and go try them somewhere in the toilet or go home, try them, and come back. It’s not so complicated until you face the other obstacle! All shops close for prayer times, which means 4 times a day, sometimes for 20 minutes and other times for 30 minutes. This is meant to give people the chance to leave whatever they are doing and go to the mosque to pray, but what happens is that all shop keepers leave their shops and wait until it’s time to be allowed to reopen the shop again. This process is very well-monitored by the police. Did I forget to mention that shops also close between 12pm and 4 pm for a break? Oh, yes it was very challenging to go shopping in Saudi.

Soon after arriving there, I gave up shopping, and decided to start working.

What about working?
It’s illegal for women to work in Saudi unless they are Saudi citizens, otherwise if a foreign woman decided to work she must transfer her residency from her family to her job location, which is risky because she could be fired anytime with no rights, and she would be sent to her home country the very same day.

However, I decided to work illegally as a teacher, where I had to hide many times in closets because of the police coming to check on any illegal workers.

I gave up working after one year, because I was wasting my salary on drivers taking me to and from work every day. I wasn’t enjoying the whole experience anymore, and the salary was far less than what men in the same position earned. It was just unfair, because men got higher salaries, and they didn’t have to spend it on taxis. Moreover, they could work legally.

Am I allowed to exist?
Living in Saudi was not easy, because having to lock your freedom and hide your identity was just a part of the struggle. My main problem was the way women were guided to be invisible; my whole existence was constantly threatened by law. To simplify: it was much easier not to exist in such a place! But I wasn’t alone. And all the women I knew found a way to deal with their day-to-day life.

Saudi women are the WOMEN
Saudi girls, women and ladies are the most powerful and energetic women I have ever met in my life. They are full of ambitions and nothing can stop them. They know how to do everything! They are artists, writers, painters, dancers, and singers in a different and more creative way that we – women from other parts of the world – have developed. They support each other with no limits and they care about their education, their life choices. Moreover, they are super trendy and fashionable. I learned that if you have a small skill, you should share it with your female neighbors, and you should keep developing yourself and your skills, so that you have even more to share with other women.

So, in my building, I had Zumba lessons, a knitting group, a book club, swimming classes, yoga, ballet, and even cooking classes.

There was always something going on, and life wasn’t miserable by any means. Late at night, after the kids had fallen asleep, women would always gather in one of the houses for shisha, tea, and fun chatting. They always had a family, and they are the most generous women you would meet. A very proud and strong society of females.

Have you experienced the world without men?
Not bad at all! I’m not a big feminist but I support women’s rights in living freely, being able to mobilize, drive, and wear what’s comfortable for them. I also support a world of diversity, and I am discussing the basic diversity of genders.

However, Saudi women are close to their fathers, brothers and other male family members. But I had no access to any man other than my husband, and it felt somehow weird. But after six years of living in Saudi, I learned a lot about how to be an independent woman, even when the society is forcing you to depend on men for all your needs, but instead you build up the ability to live independently without a man around. Living in Saudi is a different life experience, a very tough but empowering one.